Ginger was the first of my family’s pets who belonged to me. (Questioning of “ownership” of pets rather than companionship would come later.) I honestly only have vague memories of her, but I know she was my pal.

Trouble was the first pet I rescued. One morning when I was a kid, as we were about to leave the house, I noticed that my neighbor’s dogs were pretty excited, and then I saw the young stray cat that had gotten into their yard. They were great dogs. Freeway was a pit bull, and Freddie was a rat terrier (Freddie was totally the boss), and I used to hitch the fence and play with them all the time. But the poor cat wouldn’t have stood a chance. So I hitched the fence and picked him up. I asked mum if I could let him inside the house, and she said no, but she did let me put a little food out for him. He was still there when we got back. I asked mum if I could keep him, and she said to leave him outside overnight and, if he was still there the next day, she’d think about it. That night, he got hit by a car and broke both his back legs. We kept him, and I named him Trouble.

(I had a knack for rather un-subtle naming. I also had a duck named Illiterate – Illie for short. Yup, I was that kid.) 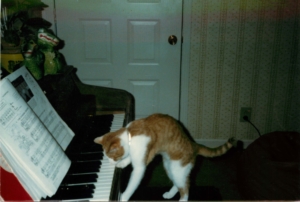 Ginger & Trouble guided me down a path populated by a whole menagerie of different animals – those that were part of my family or my neighbors’ families, later, those that lived at the city farm in London where I volunteered, and now, those that live with you lovely people – the ones I care for while you’re away (& likely what brought you to this site in the first place!).

p.s. The artwork on the homepage is by the lovely Cris Hamilton. I recommend following her on Instagram. It’s delightful.